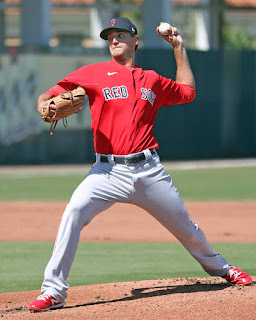 5/8 Cup of Coffee: Pitching was the story for Sox affiliates last night, as Kyle Hart (pictured) and Chris Murphy each delivered a gem. Greenville also pieced together a dominant night on the mound to win their third straight game. Nick Northcut added to his league-leading home run total, while Hudson Potts and Eduardo Vaughan stayed hot at the plate.

A couple days after Brayan Bello’s no-hitter, Kyle Hart tossed six no-hit innings of his own. The left-hander struck out eight in the best outing of his season. The bullpen struggled however, as Darin Gillies and Durbin Feltman gave up a combined five runs in their two innings of work. At the plate, Worcester scored three runs in the third but was silenced outside of that. Jonathan Arauz doubled and scored a run, while Triston Casas reached twice with a single and a walk.

Portland rallied late to tie the game at four with a three-run bottom of the seventh, but a pair of runs in the eighth for Reading sealed it. Hudson…

Level up your summer with Dutch Bros’ newest drink!

Luckin Coffee is back and bigger than Starbucks in China